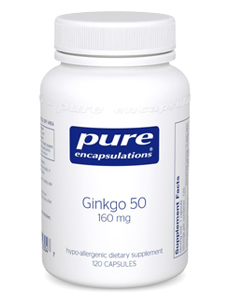 The Ginkgo tree has long been utilized for a long and healthy life. Chinese and Japanese traditions have used ginkgo leaves for centuries to support the brain, heart, and lungs. Ginkgo biloba extract promotes healthy blood flow and offers support for mild memory problems associated with aging. Ginkgo 50 is a standardized extract, providing 24% ginkgoheterosides and 6% terpene lactones per capsule.*

Cognitive Support: The active components of Ginkgo biloba, ginkgoheterosides and terpene lactones, enhance the flow of oxygen and blood to the brain and improve transmission of nerve impulses, supporting mental acuity.*

Vascular Health: Ginkgo biloba offers nutritional support to the vascular system by sustaining the strength and elasticity of blood vessels and capillaries. In addition, it maintains healthy platelet function and acts as a free radical scavenger.*

Not to be taken by pregnant or lactating women. Use of Ginkgo biloba has been associated with reports of spontaneous bleeding. Some sensitive individuals could experience mild gastrointestinal upset, headache, dizziness, palpitations, constipation or allergic skin reactions. Consult your physician for more information.

Supplement Facts:
Suggested Use: 1-2 capsules per day, in divided doses, between meals.
each vegetable capsule contains:
Other Ingredients: (hypo-allergenic plant fiber added to complete capsule volume requirement)
(-) There is no %DV or the manufactuer has not provided this data.