Think on This Drink 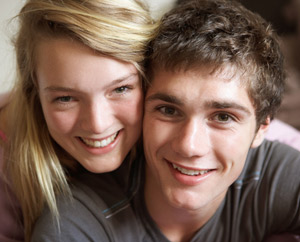 Could the key to a clearer mind be as simple as having a glass of water? A study published in the journal Appetite suggests that thinking function (cognition) in children may be enhanced by drinking water before a test.

Several studies have shown a link between hydration and thinking in adults, but less is known about the connection in children. What few studies have been conducted in this area indicate that water can help children who were purposely dehydrated to perform better on cognitive function tests that assess visual attention and visual memory.

The goal of the study was to expand what is already known about dehydration and the capacity for clear thought in six- and seven-year-old children, by looking at the children in their natural hydration state. After completing a series of baseline cognitive function tests, 11 of the 23 children were given a 500-ml bottle of water (about two cups) and asked to drink as much as they wanted. The rest of the children were not offered water. About 45 minutes later, both groups of children completed the tests again.

Compared with the no-water group, measurements of cognitive function in the water-group children were significantly improved, including visual attention and visual search. These results indicate that even under conditions of mild dehydration, childrens cognitive performance can be improved by having a drink of water, said the studys authors. Drinking water also seemed to improve mood in the children, although the team said that while these results were novel, they werent conclusive.

Water on the go

Its easy to skimp on water when youre out and about. Most experts agree that adults need about 64 ounces of water each day; children need somewhat less, depending on their size and activity level.

Kimberly Beauchamp, ND, earned her bachelors degree from the University of Rhode Island and her Doctorate of Naturopathic Medicine from Bastyr University in Kenmore, WA. She cofounded South County Naturopaths in Wakefield, RI, and now sees patients in East Greenwich and Wakefield. Inspired by her passion for healthful eating and her own young daughters, Dr. Beauchamp is currently writing a book about optimizing childrens health through better nutrition.