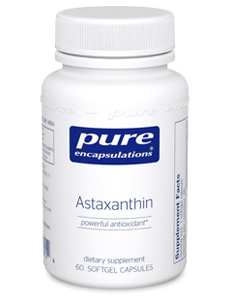 Suggested Use: 1-3 capsules per day, with meals.

Features Include: Enhanced Antioxidant Capacity: Astaxanthin is different from beta-carotene in that it has two additional oxygenated groups on each of its ring structures, enhancing its ability to scavenge free radicals. It is believed to be several hundred times more effective than vitamin E in neutralizing singlet oxygen molecules and has been shown to exert greater antioxidant activity than both zeaxanthin and lutein.*

Bioavailability And Stability: astaxanthin is formulated in a base of safflower oil to enhance bioavailability. Clinically Studied: Astaxanthin has been and will continue to be clinically studied.

Antioxidant Support: Astaxanthin protects the phospholipid membranes of cells from oxidative damage. In a recent U.S. study, it demonstrated the ability to cross the blood brain barrier and protect the retina in animals, suggesting its potential for supporting the brain and nervous system from free radical damage. In one animal study, astaxanthin helped to maintain a healthy bacterial environment in the stomach.*

Skin Support: Initial trials with astaxanthin suggest that it may boost the skin's natural antioxidant defenses against ultraviolet induced free radicals. In a human clinical evaluation, supplementation with BioAstin® astaxanthin for two weeks provided significant antioxidant protection for the skin. In cell cultures, astaxanthin provided greater protection than both beta-carotene and lutein, in part by supporting catalase and superoxide dismutase activity. Astaxanthin may also moderate the activity of polyamines generated by exposure to sunlight.*

Lipid And Cardiovascular Support: In another animal study, astaxanthin supported healthy lipid metabolism. Other studies are in progress to evaluate further its cardiovascular support properties. *

Astaxanthin is derived from Haematococcus pluvialis microalgae and cultivated under highly controlled conditions. In addition to astaxanthin, each softgel typically provides 40 mcg naturally occurring lutein and 65 i.u. naturally occurring vitamin A as beta carotene. ® is a registered trademark of Cyanotech Corporation.

At this time, there are no known side effects or precautions. If pregnant or lactating, consult your physician before taking this product.

Supplement Facts:
Suggested Use: 1-3 capsules per day, with meals.
each softgel capsule contains:
Other Ingredients: extra virgin olive oil, gelatin capsule
(-) There is no %DV or the manufactuer has not provided this data.